The mystery of the lost cushions

Last summer, when I was on holiday in Austria,  I did some embroidery. It's relaxing, fun and you don't have to take a lot with you. I was happy to have finished a bunch of pillow cases. 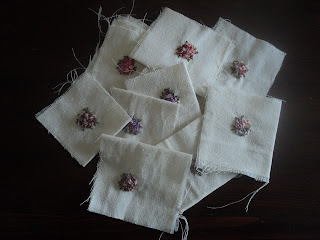 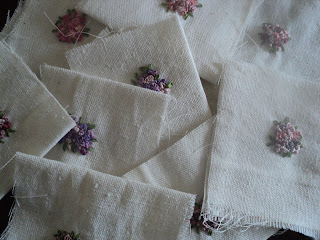 I even made photographs of them when I was home.
A few weeks ago I decided to finish them so I could list them on Etsy.
You won't believe it...they were GONE!!!

I mean really gone, I searched everywhere, in cupboards, boxes, shelves and in all the rooms of the house (even the bathroom). 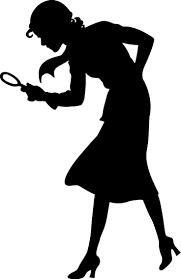 No where to be found. I thought I must have thrown them away by mistake. It happens, miniatures get lost sometimes. They're usually pretty small and are easily overlooked.

But HOORAY!!
In the drawer of my desk, which by the way I use all the time, there they were! Neatly packaged in a plastic bag, in plain sight.
I swear something fishy is going on. Who ever put them there, and when, and why??

So, after months I was finally able to sew and fill the pillow cases. 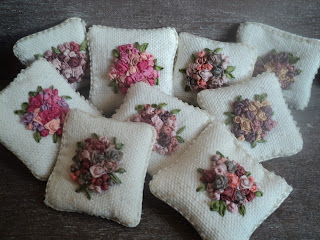 I better take pictures of them and list them as soon as possible. I don't want to lose them again! 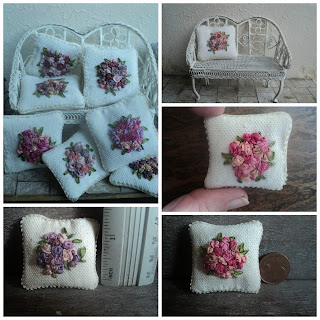 Mixing up the seasons

When I think of spring I think of birds nests, bunnies hopping around, cute fluffy lambs and flowers in bloom. And of course celebrating Easter and welcoming the new season. 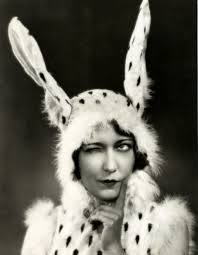 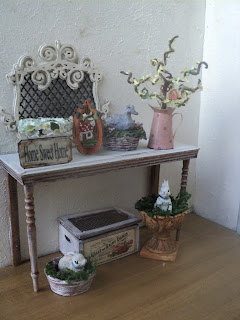 Making miniatures with spring in mind, but somehow I feel like I'm in a time warp. Just heard the weather report. Another cold spell is expected.

Maybe I should put the flower making on hold and make more winterly miniatures? 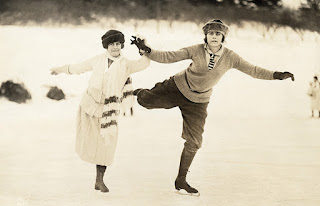 This weekend I was finally able to take some shots. I had quite a few items I wanted to place in the shop. So I spend hours (!) with my camera. The job isn't finished yet but I'm giving my camera a bit of rest, we both need it! 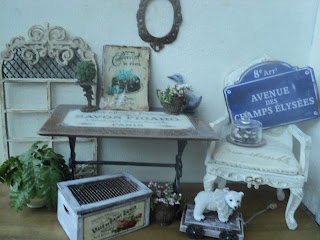 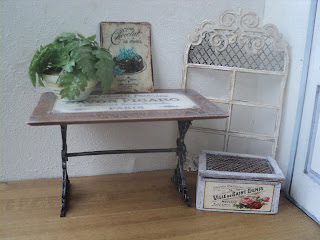 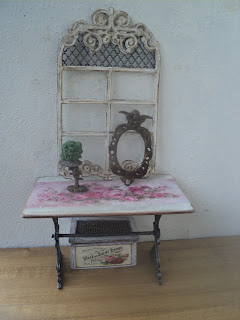 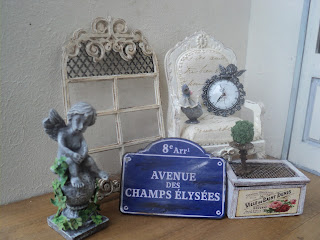 I even found the time to list most of them in the shop! Back to work tomorrow :)
Posted by Peggy at 9:08 PM No comments:

I found this amazing pram in a French book written by Monique Mineau on dollhouse miniatures. For quite a while I wanted to make it but never started because I couldn't find the materials that were used and had problems with understanding the instructions.

But finally I started it, searching internet, replacing materials with what I had at hand and changing the methods explained in the book.
Expecially the wheels and the hood of the baby carriage were a challenge. I'm finally getting somewhere but it's not finished just yet. Can you imagine that out of this mess something recognizable will finally appear?

I'll keep you posted on the progress and maybe explain in a tutorial on how I made the wheels and the hood. I'm back to my crafting table...wish me luck!
Posted by Peggy at 9:21 AM No comments:

How small can I go?

I remember I used to knit my own sweaters a long time ago. I loved Norwegian patterns or Fair Isle knitting. I haven't completed the last sweater I started about a year ago but now the weather is getting colder it's the perfect season to get that one finished too.

I have picked up knitting again though, but now in micro scale. It was quite challenging at first, the technique is the same as knitting in real life size but it does take a little more effort. Holding those tiny crochet or knitting needles feels awkward at first and loads of times I lost stitches or miscounted.
Coming across Amigurumi years ago I still wanted to knit or crochet those cute little creatures.

Last weekend I finally finished my last series of little animals. I made mice, a rabbit and a squirrel and decided to stage them in little scenes representing their homes or nests in the fall or winter time.

Here are some pictures of what I made so far. 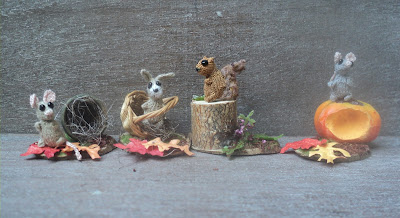 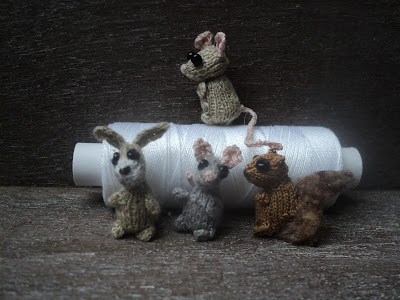 The animals are about 2 cm tall, not even an inch!
There are still so many more little ones I'd love to make; a hedgehog, a dog and cat, a fox, little birds. To be honest it is often a surprise for me too what my knitting needles do and what kind of animal it turns out to be.
Posted by Peggy at 6:41 PM 1 comment:

It's been ages since I posted something on this blog. Intentionally this blog was meant as a way to start selling my handmade miniatures.
Years later things have totally changed. I sell on my own website and on Etsy so it's time to change the content of this blog.

Another reason for starting fresh is the fact that I simply do not have the time to maintain two blogs, Facebook, Pinterest, a website and a store on Etsy. So...I've decided to stop posting on my other blog on my miniature addiction and post everything here. With everything I mean updates on miniatures I made, tutorials, interesting links and so on...

But first thing's first; this blog needs a serious make-over! So bare with me because it will take some time getting that done. I'm still a blog noob :) 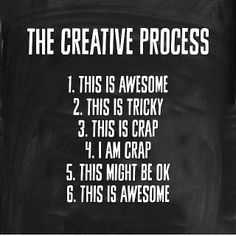 My first blog about my miniature addiction